I know, from experience, being a new parent to a kid with medical complexities can be excruciatingly overwhelming. I had no idea what the medical world was like until I was thrown into the deep end without little prep or warning.

Once you’re thrown into this world: not only are you trying to get a grip on living hospital life, recovering from your own pregnancy and delivery, and possibly trying to just get a grip on what semblance of normalcy you once had – but you want to advocate for your child and do right by them, too…Sometimes it’s all just too much to take on.

So I hope to start sharing more aspects of my experience in parenting a kid with disabilities and medical complexities that might actually impact other parents and help them on their own journey. And I do this while also balancing Sloan’s life, respecting her privacy, and ensuring I’m doing right by that badass too.

So, today, as I’m prepping for an upcoming surgery with Sloan: I thought I’d start by sharing examples of Sloan’s crib-side sign that we hung up in the early NICU days – plus what I plan to hang by her crib for her upcoming surgery, too.

A lil’ history behind the sign – because it’s actually really lovely.

Two weeks after Sloan was born, she was diagnosed DeafBlind. At the time, my mom reached out to a dear friend Bess – who happens to be an award-winning DeafBlind early intervention educator near us – and met Bess at a McDonald’s just days after Sloan’s diagnosis to find out how we can help Sloan thrive. (Some of you might know Bess from toddler group photos and reels today – Bess is just the coolest and continues to have a huge impact on Sloan’s life and education!) We were all really worried about Sloan as she was undergoing such an intense start to her life with surgeries, testing, medicine, IVs, and endless poking and prodding. Sloan couldn’t see or hear any of her family or be aware of this scary medical stuff at the time. Plus we couldn’t hold her for almost four weeks after her birth. So it was terrifying for all of us: especially Sloan.

One of the key things Bess recommended was ensuring that Sloan received communication in a way that fostered a world where she could trust the people around her. It can be simple communication, but she just needed communication through kind, gentle touch. After that conversation between my mom and Bess, we all rallied together and really focused on ensuring Sloan was warned before any form of medical treatment or care in the NICU by a simple tap or touch on her forehead.

Not only were we lucky to have Bess by our side, but we had some of the most beautifully fabulous NICU nurses and staff too. Sam (Sloan’s OG bestie!) happened to be her NICU nurse in the days following my mom’s meeting with Bess, and we still thank the NICU gods Sam was there. Sam also advocated for Sloan – working with us to hang signage around Sloan’s crib that reminded staff of Sloan’s profound DeafBlindness and clearly communicated to staff that they needed to follow certain protocols before performing cares or treatment on Sloan.

After we left the NICU, this communication technique garnered so much attention that Sam was recognized for her work in ensuring Sloan had this amazing care during our NICU stay. And…SHE DESERVED EVERY BIT OF RECOGNITION AND MORE! Because a nurse like Sam deserves every bit of love and support. Aaron and I even had the honor of speaking about Sam and Sloan’s individualized care and communication on several occasions to groups of medical professionals. The entire experience was not only amazing for us as parents but it had a HUGE impact on Sloan’s communication, growth, and her trust in others.

Sloan has been extremely trusting and open – a sensory-seeker – since she was born. And we attribute this (in large part) to her careful, respectful, loving treatment in the NICU.

Fast forward to today – Sloan doesn’t have as many medical experiences as she did during this wild start to her life: so balancing these traumatic medical experiences with the fun side of life is less of a worry for all of us now. However, with a big surgery coming up – combined with the fact that Sloan is growing and expresses her opinions better (and with more ferocity) than ever before – we brought back a version of the sign. This time with a photo of Sloan sporting her bikini, pool-side, this last summer for medical staff to enjoy – truly able to see Sloan living life in her element. (Hanging poolside is obvi something we’ll be doing again this summer post-op!)

I share the examples of our room signs and communicating Sloan’s DeafBlindness with hospital staff in hopes of connecting with those who need help or guidance on their journey: this might bring some comfort or peace in planning, knowing there is ever-present sign in your child’s room as a symbol of advocacy. Even when you can’t be there in-person to advocate for your kid.

This is our OG sign for Sloan – made by Grandpa Paul. We hung several laminated versions of this sign around Sloan’s crib during Sloan’s NICU days: and it now sits in her baby book today.

This is the sign our beautiful, amazing, OG bestie nurse Sam made for Sloan’s crib as well: describing the order of cares (so Sloan knew what to expect and when) and how to communicate with Sloan.

Sloan’s DeafBlind rundown is visible behind her head in this wonderful photo of her and her dad, Aaron.

This is the current version of the sign! The goal is to remind staff of Sloan’s DeafBlindness when we aren’t there, get ahead of the fact that she hates hospitals (I don’t blame her), and show them a photo of Sloan in her element at the pool: referring them to the IG account where they can learn more about Sloan. (HIPAA might not like me here, but I’m not always a fan of HIPAA – so we’re even.) 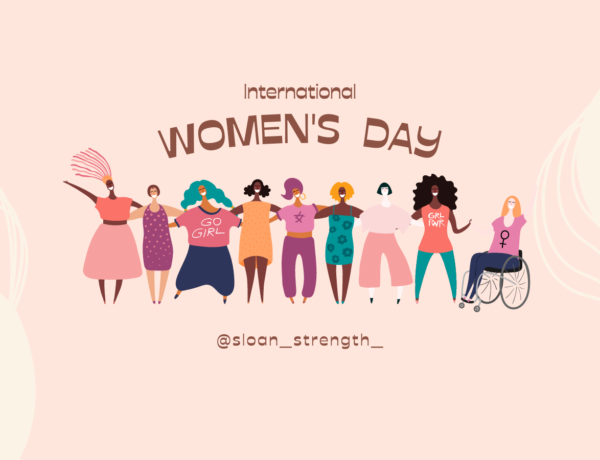